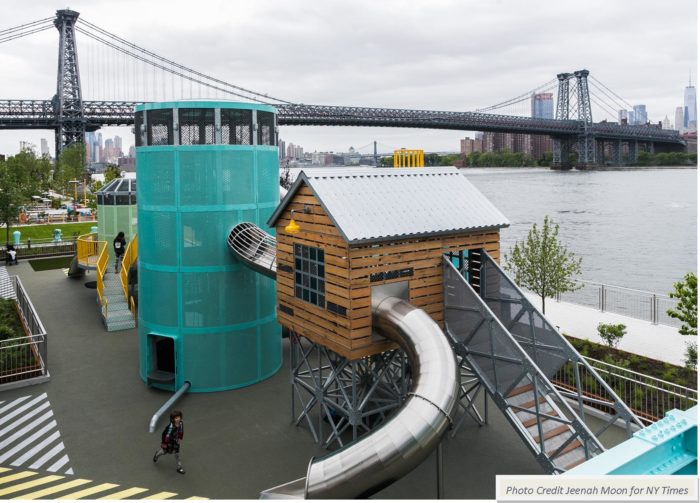 Bespoke capabilities bring History to the Present in New York

One of this weekend’s most anticipated art openings in Williamsburg has all the signature Brooklyn components: a postindustrial setting; the use of reclaimed materials; a nearby boutique taqueria; and a historical motif. And, yes, it’s a playground.

Designed by the artist Mark Reigelman, the playground sits at the northern end of Domino Park, a six-acre recreation area along the waterfront that opens to the public on Sunday. The green space is a central attraction in a sprawling project being developed by Two Trees Management just north of the Williamsburg Bridge, on the site of the former Domino Sugar refinery. The park nods to the history of the refinery by incorporating its industrial remnants, including syrup collection tanks.

Now the site’s previous life has inspired Mr. Reigelman’s design for the playground. As children proceed through the playground’s three sections, he explained, they mimic the refining process. “The idea is that a child enters as raw sugar cane,” Mr. Reigelman said, “and exits at the last portion of the playground as molasses, or sugar cubes.”

Practically speaking, this means that children first climb a steep ramp into a cabin, then proceed through a series of tunnels, climbers, slides and catwalks through a rudimentary version of the manufacturing process. Signs evoke the refinery, and mechanical elements borrowed from the site include spinning valve wheels that were cast from Domino Sugar originals.

That might seem like a jarring scenario amid concerns about the health hazards of sugar and childhood obesity. But imagery aside, the play equipment is challenging enough to make clear that this is a place for burning calories, not consuming them. It’s more “American Ninja Warrior” training course than Wonka tour. And the manufacturing conceit is so subtle that children are unlikely to walk away with a candy jones.

“I do not want kids to be learning how to make sugar,” Mr. Reigelman said.

“What kids should be learning here is language, social dynamics, physicality,” he added. “Like how to move through space and get through challenging obstacles.”

Mr. Reigelman is best known for public installations that fuse playfulness with history, such as “The Meeting House,” a canted Quaker-style house installed last year on the Rose Fitzgerald Kennedy Greenway in Boston.

This was his first playground design, and he spent hours in New York parks, studying the use of materials, the arrangement of sightlines and layout. Playground rules in the city generally forbid adults without children. So during the design process, which started two years ago, Mr. Reigelman said, “I had to borrow friends’ children.”

A couple of weeks before the opening, I accompanied three Brooklyn-based playground critics — my children, who are 7, 5 and 2 — on an extensive test of Mr. Reigelman’s venture. They leapt. They gamboled. They fell. And then, after a (healthy) snack break, I asked them for their impressions.

The youngest held his tongue, but flung himself headfirst through a low entryway and declined several invitations to leave.

I scheduled a second interview a week later. Their highest praise went to the central portion of Mr. Reigelman’s design, the 26-foot-high silo enveloping ladders, webbed climbing material and the entrance to a slide that is far more precipitous than it seemed from outside. On the whole, the critics agreed, the space was worth recommending to a friend.