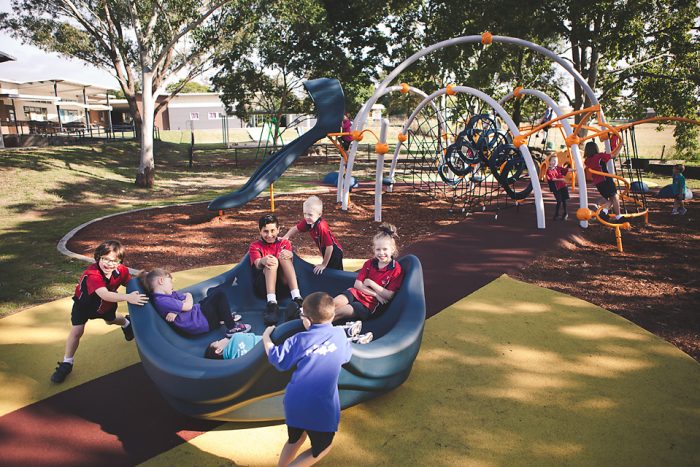 A large space with ample shade from established trees, the original brief for this playground was to replace the existing system on a ‘like for like’ basis – a series of platforms and connectors with a slide.  One look at the Evos system however, and this junior school playground was on a track completely outside its original expectations.

Our vision saw the Evos as the centrepiece of the school – bright and visible down the central walkway of the school and creating a sense of excitement and pride in the school community.  Offering un-prescribed play routes and varied challenge for a multitude of users, the Evos is a classic favourite which has been popularly received in schools.

Additional play items were incorporated to offer a huge diversity of play activity for the students.  The Omni Spin for multi-user spinning fun, Cozy Dome for climbing, hide and seek, or quiet time out, Rubber Domes for all manner of activity, Double Humpty Climber for even more climbing and a DropShot for ball skills and multi user challenge.

A primary requirement in the brief was to include rubber surfacing to reduce the amount of bark going back to the classrooms.  We incorporated the school’s logo into the overall design to form not only a four way access route for students of all abilities, but a strong link to the identity and pride of the school.

Believing initially that this would be outside of their budget, the school was obviously pleased with what could be achieved with good planning, great vision and a company with in-house teams completing the work from concept through to completion.

Our construction team were presented with a hand made thank you card from the students – thrilled that their work was so appreciated.  We were also thrilled when not long after completion, the area was inundated with storm water but remained completely unscathed from effective drainage implementation.

Happy parties all round!

Attending the opening and Blessing of the playground was an honour and the school’s pride in what they now have is certainly something to be proud of.  The play benefits were shared with the school community throughout the service as real positive benefits to them all as individuals and the kids really do love it.  Apparently it’s difficult to get them to go home of an afternoon!