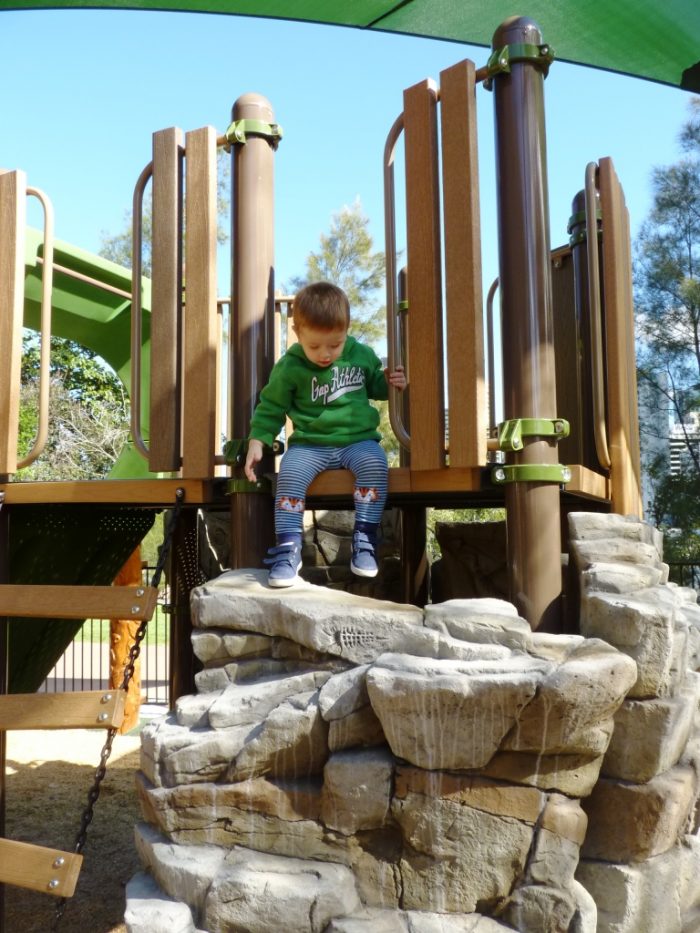 Overlooking the Brisbane River, by the Kangaroo Point Cliffs and the famous Story Bridge sits CT White Park.  A popular walking and cycling route, the new playground makes a great stop off point for families and for the many residents living nearby.  The park had received a revamp from the tired old existing playground and now houses one of our “Canyon Climber” play structures – glass fibre reinforced concrete, hand moulded and painted with creature and fossil finds throughout, but designed for non prescribed climbing access to the main deck.  Children can climb inside and out – or even use the more traditional access routes to reach the steep double swoosh slide!  The rock features were designed to blend with the Kangaroo Point Cliffs – a popular climbing destination in their own right.

A number of bespoke items have been included within the playspace, turning it into more than “just” a playground.  Hand carved hardwood totems provide a visual aesthetic and tactile element – a softening of the playspace blending it into the natural environment and paying homage to its surrounds.  Combined with the many creature finds on the main structure, children find an additional element of discovery as they move through the playground.

To add that extra piece of personalisation, we looked into who CT White was and discovered a Botanist from the early 1900’s – who was responsible for developing the Queensland Herbarium into a scientific institution and had been the QLD Government’s Botanist, documenting countless plant species new to science.  We gave the park’s name true meaning and personalised Mr Cyril Tennyson White and his work in a digitally fused sign, helping to educate visitors about the park’s namesake.

As always, safety of park users and passers by was essential, with the inclusion of a fence along the pathway protecting young wanderers (or escapees) from cyclists utilising the path.