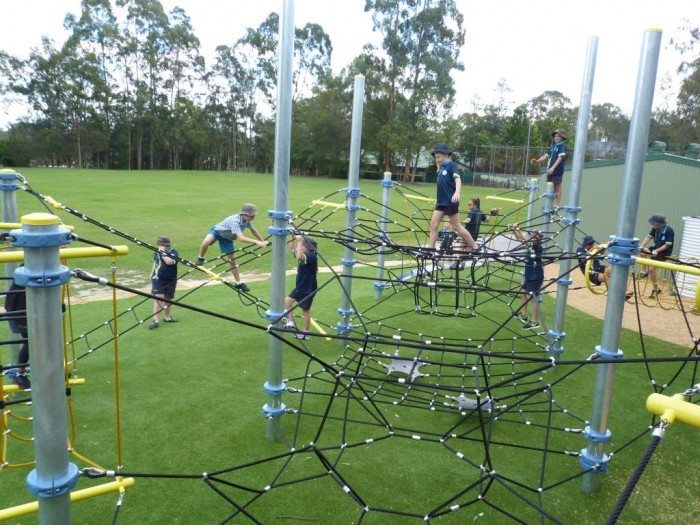 Forest Lake State School was after a challenging – and somewhat daring – senior playground that offered climbing and some real height.  The P&C had worked incredibly hard for some time to raise the funds to treat the senior students to a new playspace and the Year 6 students were excited that they would also get to enjoy the playground before the end of their primary years.

Each grade at the school has about 130 children, and while there was no expectation for one play system to hold that number of children, its capacity was certainly a major consideration.

Our submission was displayed to the children along with other companies, and we overwhelmingly won the vote with our custom designed net system that went “beyond the expectations” of the school community.

A challenging and exciting playground, the combination of net based components promotes non-prescribed play, fitness, coordination, cooperation, balance, agility, core strength – you name it, if it’s physical, it’s on this playground!  Quad cells, a quad tramp, funnel net, labyrinth, spreader belt and wiggle walks, vortex tunnel, shinny ridge climber and spreader cross over – just some of the fun contained in the main system!

On the peripherals, less busy play opportunities are offered with the 3m Orion Net and 5 bright rubber domes – both end areas providing active play or a ‘hang out’ zone when children need a rest from the centre of the action.

We watched in amazement as 110 Grade 4 students descended on the playspace for their “scheduled time” on the playground – as you can imagine, this new addition is in high demand at the school!  Every child found a space to play – no waiting in lines to move through like on more traditional playgrounds, but rather constant movement and flow occurring over, under, through and around the challenging net components.  Climbing, scaling, jumping, traversing – all playing so well together in an entirely unprescribed fashion.

We have heard from the school that “the playground is also being used as part of our positive behaviour rewards programme, and as such has its own booking schedule for classes to enjoy individual plays.  Everyone from the Prep’s to the Year 6’s absolutely love it!”

The project’s completion was a better than expected outcome for the school – giving the Grade 6’s a full term to enjoy it before heading off to high school.  And their parents, who worked so hard over the years to raise the money, have a sense of pride in making this a reality before their children leave the school – with a great legacy left behind!